Victorious Commanders: D-Day's and the Christian's


June 6, 1944, is a day that will live in victory. American air and sea forces landed in German-occupied Normandy, and it was a turning point in World War II. 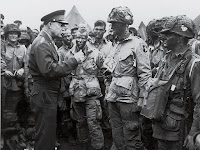 Lost in most annual D-Day recollections is the stunning stress felt by Allied Supreme Commander General Dwight Eisenhower. As he planned the fateful day, Eisenhower bore the weight of three million troops preparing for a massive assault on the bristling German Fortress just across the English Channel. A war correspondent described him as “bowed with worry, as though each of his four stars weighed a ton”.

One of the three most favorable days for invasion was already lost to the weather. Meteorologists predicted a slight break in the storm on June 6 with conditions deteriorating after that. The next best alternative would be the following month, but the delay would be risking troop morale and secrecy.

As the deadline drew closer, the generals and admirals had their say. The final decision was Eisenhower’s. At 4:15 A.M. on Monday, June 5, after a tense period of quiet consideration, with hands clasped and face ashen, the General said, “I am quite positive we must give the order. I don’t like it, but there it is. I don’t see how we can do otherwise. Okay, we’ll go!” The “Longest Day”—the invasion of Normandy—had dawned.

With the initial commitment made, the grim consequences for the thousands of troops and the entire free world became a frightening prospect. While Eisenhower hoped for the best, he braced for the worst.

In the early uncertain hours of D-Day, he wrote an announcement on a slip of paper—an announcement he hoped he would never have to make. “Our landings in the Cherborg-Havre area have failed to make a foothold, and I have withdrawn the troops... My decision to attack was based on the best available information. The troops, the Air, and the Navy did all that bravery and devotion to duty could do. If any blame attaches to the attempt, it is mine alone.”

Eisenhower shoved the paper into his pocket where it was discovered after a busy six weeks of successful invasion. By then, it was history that never happened.

In a sense, Eisenhower stood guard over his troops and the free nations they represented. They had received a commitment from him that he would not consent to them living as cripples at the hands of tyrannical oppression. But should the effort fail, he had already declared himself solely responsible if he were brought to trial before the court of history.

The Lord Jesus Christ, briefing His troops for a world-wide, age-long assault upon the Devil’s territory, pledged Himself to accompany them into battle. "Go ye into all the world and preach the Gospel to every creature" (Mark 16:15) and "…lo, I am with you always even unto the end of the world" (Matt. 28:20) have been at once the Great Commission and the Great Comfort. The disciples had been sent to a task for whose victory the Commander had promised to take full responsibility.

When the great missionary David Livingstone, who explored much of Africa sharing the Gospel, reviewed his success, he affirmed the integrity of His Lord time after time. In his diary, when death lurked near, he quoted the Matthew passage and wrote of the calm and comfort Jesus’ promise provided.

When Livingstone returned to his homeland later the same year, the physical marks of illness and injury obvious, he again spoke of the precious promise of Christ. "Would you like me to tell you what supported me through all the years…? It was this: ‘Lo, I am with you even to end of the world!’ On those words I staked everything, and they never failed. ... It is the word of a gentleman of the most sacred honour, so there’s an end of it."

Upon the truthfulness of God’s Word, the success of the Christian mission has always hung.

Dave Virkler (from "Presidential Profiles" and a previous blog post)