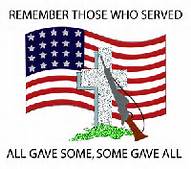 Memorial Day, originally called Decoration Day, is a day of remembrance for those who have died in service of the United States of America. Regardless of the exact date or location of its origins, Memorial Day was borne out of the Civil War and a desire to honor our dead. It was officially proclaimed on May 5th 1868 by General John Logan. The first state to officially recognize the holiday was New York in 1873 and is now observed in almost every state on the last Monday in May

On the first Decoration Day, General James Garfield made a speech at Arlington National Cemetery, and 5,000 participants decorated the graves of the 20,000 Union and Confederate soldiers buried there.

The dictionary says this about the term memorial. It is something designed to preserve the memory of a person. It is Intended to commemorate someone or something such as a memorial service in the dead man's honor. And one of the synonyms for the concept is remembrance.

Those who have sacrificed themselves for the freedoms we now enjoy in America are indeed heroes. They gave their best and forfeited all of the things we sometimes take for granted. And one day certainly does not seem near enough to honor them properly.

But there is another solitary sacrifice that brought about far greater results and occurred on just one day in history. This one impacted both the physical and spiritual realms. That, of course is the voluntary death of Jesus Christ on the cross. Through the giving up of His own life, He procured the  forgiveness of sin for mankind and made redemption possible for all who would trust and believe.

And although this eternity altering act  would seem unforgettable to say the least, sometimes even those who have been saved do tend to forget. And that is why we find that all true believers are to observe a periodic and symbolic memorial celebration of thanksgiving and remembrance.

It is found in 1Corinthians 11:23-26 and is typically called communion or The Lord’s Super. There we read the words of the Apostle Paul as he related the Lord's own directive to His people.

“For I received from the Lord that which I also delivered to you: that the Lord Jesus on the same night in which He was betrayed took bread; and when He had given thanks, He broke it and said,  Take, eat; this is My body which is broken for you; do this in remembrance of Me.  In the same manner He also took the cup after supper, saying, This cup is the new covenant in My blood. This do, as often as you drink it, in remembrance of Me.  For as often as you eat this bread and drink this cup, you proclaim the Lord's death till He comes.”

Millions of us today able to pursue our goals of life, liberty and the pursuit of happiness. That is because of what so many others have done, for so long, to keep us free from tyranny and bondage. But only those who fully understand these two special elements can, and should, participate  in Christ’s special table. In doing so, we are reminded of our priceless eternal liberty and made thankful for the  transforming truth written in John 8:36. “Therefore if the Son makes you free, you shall be free indeed.”