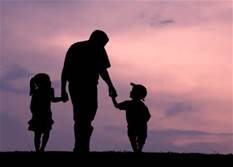 Father's Day in the United States is on the third Sunday of June and celebrates the contribution that fathers and father figures make for their children. Its origins may lie in a memorial service held for a large group of men, many of whom were fathers, who were killed in a mining accident in West Virginia back in 1907.

On this day, many send cards or gifts to their fathers. Often these include things like sports items, clothing, electronic gadgets, and tools for household or automotive chores. Many also make phone calls and gather together to celebrate when possible.

Father's Day is not a federal holiday. Organizations, businesses and stores are open or closed as usual.  Just as with Mothers day, restaurants are typically busier than usual as many take their fathers out for some special meal.

A woman named Sonora Smart Dodd was an influential figure in the establishment of Father's Day. Her father raised six children by himself after the death of their mother. This was uncommon in that day. Sonora was also inspired by the work of Anna Jarvis, who had pushed to establish Mother's Day celebrations. Father's Day was officially recognized as a holiday in 1972 by President Richard Nixon.

Just as with mothers, fathers were designed by God to have special and unique roles within the family unit and in the culture. God made it clear in Genesis that the two were created to help and compliment each other, When one or the other is absent for any reason, and especially when young children are involved, the task of raising a family becomes far more difficult.

Those who have been privileged to have a Godly father have been greatly blessed. That is particularly true when what is taught in Ephesians 6:4 has been the case. “And you, fathers, do not provoke your children to wrath, but bring them up in the training and admonition of the Lord.” And there is a promise associated with that seen in Proverbs 22:6. “Train up a child in the way he should go, And when he is old he will not depart from it.” But then too, there is a command given to children as far as their side of the relationship. Paul writes in Ephesians 6:2-3, "Honor your father and mother," which is the first commandment with promise:  "that it may be well with you and you may live long on the earth."

On this Father’s Day, take time to praise your Heavenly Father without whom life is ultimately meaningless and eternity even worse. And be sure to somehow honor your earthly father just as Scripture demands. He may not be perfect. None ever are. That statues is reserved for the Creator alone. But the above verse in Ephesians dose not require our earthly fathers to be to be flawless. It simply reveals for us all what is good, right, and expected by our perfect and loving Father in heaven!

“Furthermore, we have had human fathers who corrected us, and we paid them respect. Shall we not much more readily be in subjection to the Father of spirits and live?”  Hebrews 12:8-9