A Single Life of Faithful Service 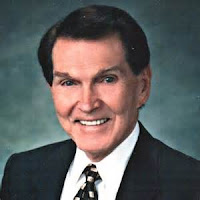 Author, pastor and prophet Tim LaHaye died of a stroke on Monday, July 15th. He was 90. LaHaye was perhaps best known for his "Left Behind" end-times series with co-author Jerry B. Jenkins. LaHaye spent over 60 years in the pulpit and wrote more than 60 books, many of which revolved around prophetic issues and subjects.

During his ministry he led multiple churches, including Shadow Mountain, which is now pastored by David Jeremiah. LaHaye also co-authored the 16-book "Left Behind" series, which sold more than 80 million copies. The series topped the best-selling lists of The New York Times, USA Today, and The Wall Street Journal.

For most of his ministry he was married to Beverly Ratcliffe. The couple wed in 1947. Mrs. LaHaye was likewise a giant in the Christian community and founded Concerned Women for America in 1979. It was the nation's largest public policy organization for women with a membership of 600,000. Their work as a team prompted Time magazine to name the LaHayes "The Christian Power Couple" in 2005. He was also listed as one of the 25 most influential evangelicals in America. Wheaton College named LaHaye the most influential leader in evangelical Christianity in 2001 — coming in ahead of leaders the caliber of Billy Graham, James Dobson and Jerry Falwell.

This man was certainly one of the giants of the Christian faith. The impact he made was enormous and continues on through his decades of faithful service to God. And his full influence for the kingdom will not be realized until it can be seen in eternity. He was a spiritually gifted and brilliant man. But most importantly, he was found faithful!

Few will ever possess the gifts of Tim LaHaye or others like him. That is just the reality. But the Bible does not say we can, or all, should be a Tim LaHaye. Scripture simply confirms that we are to give our best back to God with whatever He has blessed us with to serve Him. That is certainly seen in the Parable of the Talents in Matthew 25. There we read of a man traveling on a long journey and who gave three servants each specific investments to work with and increase upon. The two who were given the most doubled what they had been left with. But the servant given the least simply ignored his share and did absolutely nothing with it. This decision would find him later suffering the wrath of his expectant, but highly disappointed, master.

The Bible says in 1 Corinthians 4:3, "Moreover it is required in stewards that one be found faithful." The Greek word for "steward" is basically a manager of a household or one who is an overseer. And that is precisely the position that every believer in Christ has been given. Some have been given larger areas of service to attend to than others, but that is not the issue. What matters is that each has been granted a gift or gifts from the Holy Spirit that are to be faithfully nurtured, used and invested. They are to never be ignored or hidden away as did the lazy and unfaithful servant just mentioned.

In the parable in Matthew 25, the reward for faithfulness for serving God is also revealed. I’m sure Tim LaHaye has already heard these words or something similar. "His lord said to him, 'Well done, good and faithful servant; you have been faithful over a few things, I will make you ruler over many things. Enter into the joy of your lord.'"  And if we are to hear the same when we someday stand before God, we must give the Lord our consistent best now being motivated by all that He has done for us!

"And whatever you do, do it heartily, as to the Lord and not to men, knowing that from the Lord you will receive the reward of the inheritance; for you serve the Lord Christ." (Colossian 3:23-24)