A True Survivor of Survivors 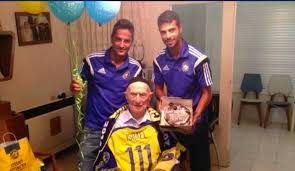 He is not from some bizarre reality TV show, but is the world’s oldest Holocaust survivor. His first name is Israel, indeed interesting considering what the target was for one of the most brutally memorable events in all of human history. At his recent birthday he turned an amazing 111 years old. That is a long time to live and to witness so very much – even though some of what he saw and experienced firsthand was beyond horrific!

Israel Krysztal was born in Poland, was an orphan, and was eventually sent to the infamous Auschwitz concentration camp in 1944. Although he would survive the horrors there, his wife, who was also with him, did not.

With the arrival of this latest birthday, the Maccabi Tel Aviv Football Club organized a birthday party because they were very moved by Israel’s life story. The team has apparently been honoring other Jews who likewise suffered in the Holocaust. At the celebration, the team presented him with a jersey bearing the number 111. No doubt he will have his number upgraded for every additional year he lives.

The actions of the Holocaust represent mankind at its very worst. Few things in recent history are its evil equivalent. It was sin personified and one of Satan’s greatest victories against humanity and God. It was so inconceivable that some today still deny its reality and levels of brutality. These believe that men could in no way do such unspeakable things to others. But, with Satan in control and calling the shots, anything is possible. Such things are a vivid proof of man’s terrible fall back in the Garden of Eden and into uncontrollable sin.

But that is not the end of the story. There was someone else who came to deal with sin – all sin. That includes the extent at Auschwitz and also those small sins that seem almost silly in comparison. But they are not silly at all in the eyes of a holy God whose Son was sacrificed for even these lesser acts. Without Christ’s victory, the human race would have nothing but misery and death. What He did as God and Savior is summed up well in Romans 5:21. "But where sin abounded, grace abounded much more, so that as sin reigned in death, even so grace might reign through righteousness to eternal life through Jesus Christ our Lord.”

Jesus Christ did not come to just do good and set an example – although He did obviously that. But He came primarily for what is written in 1 John 3:8. “For this purpose the Son of God was manifested, that He might destroy the works of the devil.” And yet some will always think, "Then why did the Holocaust occur? Why the killing fields of Cambodia? Why the carnage of modern day radical Islam? And even why all the smaller examples of evil that regularly dominate the average news show?" These are understandable questions based on this verse alone.

But Christ has indeed destroyed the works of the Devil, but not totally for now on everyday terms. He did so by defeating Satan’s grip of sin and its deadly consequences on the entire race. "He Himself likewise shared in the same, that through death He might destroy him who had the power of death, that is, the devil, and release those who through fear of death were all their lifetime subject to bondage.” (Hebrews 2:14-15) Christ defeated Satan because mankind could be saved, freed and able to withstand the so-called "wiles" of the adversary. (Acts 2:21, Ephesians 6)

And the Devil is eternally defeated in the long run. “The devil, who deceived them, was cast into the lake of fire and brimstone where the beast and the false prophet are. And they will be tormented day and night forever and ever.” (Revelation 20:10) Satan may trouble the world for a while, but His ultimate power has been officially broken and his future officially certain and sealed.

Not many will physically live to see age 111 or even close. But everyone’s soul will live on forever. The only relevant question is whether we will reside in the darkness of hell with the one who deceives or in the light and glory of heaven with the One who delivers? (1 Corinthians 6:20) The final outcome depends solely on how we respond to Christ’s victory over sin and His defeat over Satan through the cross. There are only two available options, and each of us, at life's end, will have chosen either carefully or very foolishly!

“For the message of the cross is foolishness to those who are perishing, but to us who are being saved it is the power of God.” (1 Corinthians 1:18-19)