What Will A Day Bring Forth? 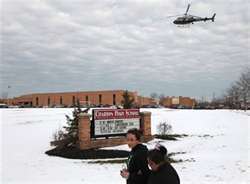 It has not occurred for a while, but in prior years, it had become a growing scourge on the nation. Perhaps the name most synonymous with it would be “Columbine” back in April of 1999. But it has happened again, and this time in Chardon, Ohio. On Monday morning a student gunman opened fire in a cafeteria. When the dust settled, several were wounded and one died on the scene. But since the gruesome encounter two more  students have died as well.

It appeared that the alleged shooter randomly targeted and attacked a group of students sitting together and that the one who was killed on the spot was gunned down while trying to duck under the cafeteria table. Others still remain in critical or serious condition.

Witnesses recognized the suspected shooter as Thomas T.J. Lane. He was not apparently a student at Chardon High School, but rather attended Lake Academy - an alternative school that serves students who may have been referred to the school because of academic or behavioral problems.

Chardon had no metal detectors, but current and past students said it had frequent security drills in case of a shooting. Many who were seeking safety during the rampage were sending countless messages inside and outside the school about what was happening during the deadly assault. One shocked survivor stated to WKYC-TV, "This is something that could never have been predicted."

The above comment echoes precisely the simple, but truly critical, words found in the wisdom books of the New and Old Testaments. Proverbs 27:1 warns, “Do not boast about tomorrow, for you do not know what a day may bring forth.” Then James 4:13-14 uses a slightly different angle and more detailed language to project the same reality. “Come now, you who say, "Today or tomorrow we will go to such and such a city, spend a year there, buy and sell, and make a profit ;  whereas you do not know what will happen tomorrow. For what is your life? It is even a vapor that appears for a little time and then vanishes away. Instead you ought to say, 'If the Lord wills, we shall live and do this or that.' But now you boast in your arrogance. All such boasting is evil.” Ignoring the possibility of life's unexpected end is beyond foolish and can be eternally devastating.

The pain of the grieving parents at Chardon High Scool in Ohio can’t even be imagined. To send a beloved child to school only to have their life senselessly snuffed out is simply unfathomable. We can only hope that those who had their young lives so brutally, and unexpectedly, ended were more spiritually prepared to meet their Creator than they were to look down the barrel of a deadly firearm. We pray that they knew Christ as personal Savior who alone can bring comfort in such cruel chaos to those left behind, while unleashing the incredible truth spoken of in 1 Corinthians 15:54-57.

“So when this corruptible has put on incorruption, and this mortal has put on immortality, then shall be brought to pass the saying that is written: 'Death is swallowed up in victory " "O Death, where is your sting? O Hades, where is your victory?' The sting of death is sin, and the strength of sin is the law. But thanks be to God, who gives us the victory through our Lord Jesus Christ.”

All that can be done now is to pray for the victims' families, the perpetrator himself and also his devastated family. And hopefully this horrific experience will refocus everyone involved to the stark reality that life is fragile – sometimes even for the young and healthy. And pray too, as in other similar events, that the gospel of salvation in Christ and eternal security will be boldly preached and will reach the fertile soil of hurting hearts now desperately seeking answers, closure and peace in a fallen and uncertain world!

Pray particularly that the truth of Jesus' own words below will reigh supreme for those for whom this tragedy may pry open the door of their hearts to hear the redemptive voice of God's Holy Spirit.

“Jesus said to her, 'I am the resurrection and the life. He who believes in Me, though he may die, he shall live. And whoever lives and believes in Me shall never die.' " (John 11:25-26)