The Two Most Amazing Sports Stories?

If I were to ask you what the two biggest sports stories occurring in the last six months, what would your answer be? For most, it would have to be the recent victory of New York's Giants over Tom Brady and the favored New England Patriots in the Super Bowl, and secondly the Cardinals win in the World Series. So the answer to the above question is relatively easy for most real and even casual fans.

But if I were to ask the same question with a slight twist, the answer might be vastly different. What would be the two most unexpected and major stories in this same time frame? What would be the two stories that have entertained, inspired, and created an amazing nationwide buzz in sporting and even non-sporting circles alike?

The answer to this question is not about some championship team’s heroic effort in a specific sport. It is instead over two individual players, both on mediocre teams, but who single-handedly created an unexpected and perhaps unparalleled stir like never before. 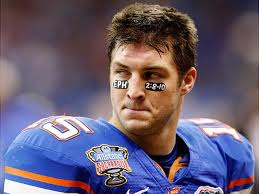 In football. it was Denver's Tim Tebow, the rookie quarterback who took a badly floundering team to the playoffs despite all the odds. Tebow came on the scene a few games into the season and seemingly pulled off miracle win after win. Had he been anyone else, it may have been written off as hard work, talent, good coaching and team work. But when it then became centered around a young man with a very outspoken Christian faith, that placed Jesus Christ first and football second, it created a firestorm of controversy. Most teams would not have even touched someone in the draft who would openly admit that anything superceded his allegiance to his franchise and earning every dollar of his contract with no outside ‘distractions’ - including God!

But somehow Tebow pulled off both and gained a monstrous following – one that defies logic. Of course, he has his share of detractors. But making the playoffs, and beating a highly favored Pittsburgh team in round one, silenced some of them - if only temporarily on the outside. Interest in his life, career, and his faith remain at a fever pitch.

Then there is another story, also about one young man who plays a different sport and has turned an entire league upside down despite never even being drafted by an NBA team. That is simply unheard of. 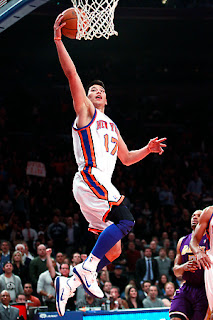 He is Jeremy Lin, who broke into the New York Knicks slumping lineup after two of their superstar players missed multiple games - one through injury and the other by the tragic death of a brother. But Lin literally 'exploded onto the court' and has lead the Knicks to a 5-0 run as of this writing, while averaging about 25+ points per game in the process. Not bad for a nobody from nowhere at only 6'3". The team is now wondering how this will all fit together when the others return and is even talking of becoming an overnight contender.

One sports writer stated this. “The problem is that as stories go, Jeremy Lin is bigger because he is a non-drafted Asian-American guard from Harvard who is playing as well as almost anybody in the NBA. How unlikely is this? Imagine the Kentucky Derby going to a three-legged horse.”

But like his newsworthy Christian brother in the NFL, Lin admits the constant struggle he faces. Deep inside he knows it is bigger than him. He stated, "There is so much temptation to hold on to my career even more now," Lin said. "To try to micromanage and dictate every little aspect. But that's not how I want to do things anymore. I'm thinking about how can I trust God more. How can I surrender more? How can I bring him more glory?" 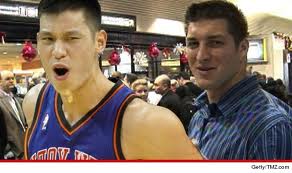 The bottom line here is that maybe the biggest and certainly the most important sports stories in the past six months are not about the success of any particular teams. But they center on the unusual faith and testimony surrounding two very young and brave men. These resemble Paul the Apostle, and say with utmost confidence to anyone and everyone, “Nevertheless I am not ashamed, for I know whom I have believed and am persuaded that He is able to keep what I have committed to Him until that Day.” (2 Timothy 1:12)

Today, Tim Tebow and Jeremy Lin are successful, and famous athletes. They have used their God-given talent but have not forgotten to glorify God in the process. They serve Him first and make no bones about it! And they apparently consistently abide by the truth and promise found in Jesus’ words in Matthew 6:33.

“But seek first the kingdom of God and His righteousness, and all these things shall be added to you.”