What Are Your Christmas Traditions? 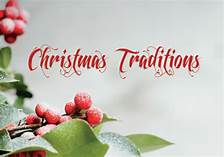 It is the Christmas season once again. And for so very many it really is the most wonderful time of the year. It just somehow feels magical due to the decorations, lights, gifts, festivities and all the rest.

But Christmas is celebrated by most Christians on December 25 and it commemorates the birth of Jesus of Nazareth. Americans, like many around the world, have developed their own traditions and observances - many of which have changed greatly over time.

Today, most Americans blend religious and secular customs with their own family traditions. There is typically the incorporating food, decorations and rituals often from the places of their roots. Meals like roast turkey and ham are perhaps the most popular But depending on the region, so are tamales, roast goose with red cabbage, crawfish jambalaya, roast pork or “seven fishes” seafood salad. Many of course hang stockings somewhere or other. And then of course there are those wonderful, though highly predictable, Hallmark channel movies that always have a happy and romantic ending with snow suddenly falling at the conclusion almost every time! Don't tell me you have not noticed that one.

In the Southwest, lanterns made from brown paper bags and  weighted down with sand and illuminated by a lit candle, are displayed on Christmas Eve. Many Mexican Americans celebrate a procession that re-enacts Mary and Joseph’s search for a place to bed down in Bethlehem. And Swedish Americans hold St. Lucia festivals.  Other Christmas traditions  began during the 19th century. Santa Claus assumed the person of a jolly dispenser of gifts and pilot of a legendary reindeer driven sleigh. And Germany is credited with starting the tradition of Christmas trees in the16th century Yes, there are many different Christmas traditions and more than we would expect when we look around the world.

But with that said, and despite how special and enjoyable these all may be, non of them should take the spotlight off of what the holiday is really about. It represents the ‘incarnation’ of Christ which basically means the Creator-God becoming literal human flesh and the God-man. That is something that is impossible for mere mortals to fully grasp. But it is a truth that put into motion God’s great plan of redemption that would be later be fulfilled on a Roman cross where the babe of Bethlehem became the sacrifice for the sins of humanity. This is part two of Christ's coming. But it is the aspect many decide not to deal with or celebrate as it is not nearly as pleasant and fun as this holiday this arrives before it!

One common tradition for many is watch the classic seasonal program called 'A Charlie Brown Christmas'. Although the cartoon was produced for mere peanuts, no pun intended, it pushed all tradition aside briefly and clearly got to the heart of the matter. That climaxed when little Linus stepped onto a stag and shared with a struggling depressed Charlie Brown exactly what the holiday was all about. To do so he simply stated, verbatim, the words as Scripture reveales in Luke 2:8-14.

“And there were in the same country shepherds abiding in the field, keeping watch over their flock by night. And, lo, the angel of the Lord came upon them, and the glory of the Lord shone round about them: and they were sore afraid. And the angel said unto them, Fear not: for, behold, I bring you good tidings of great joy, which shall be to all people.  For unto you is born this day in the city of David a Savior, which is Christ the Lord. And this shall be a sign unto you; Ye shall find the babe wrapped in swaddling clothes, lying in a manger. And suddenly there was with the angel a multitude of the heavenly host praising God, and saying, Glory to God in the highest, and on earth peace, good will toward men."  Jesus Christ entered time and humanity to be our Savior!

I trust you will enjoy to the max whatever traditions you have come to love at this most unique and significant time of the year. But if you have never developed any that somehow include, and expand upon, what Linus shared, then perhaps insert something special along those lines this year. Take some time to add some moments that focus only on the incarnation and precisely why God's Son humbled himself and came in the form of frail human flesh. Focus in on why we can be forgiven and spend eternity with Him in heaven! That is what truly matters most. And that is what can be far more inspiring and meaningful than even the most lovely of traditions we may ever observe!

“But when the fullness of the time had come, God sent forth His Son, born of a woman, born under the law, to redeem those who were under the law, that we might receive the adoption as sons.” (Galatians 4:4-5)