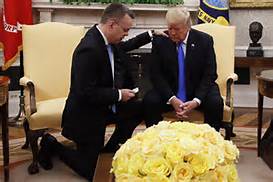 His name is Andrew Craig Brunson,  an  America pastor  and whose name came to prominence back in October of 2016. It was then that he was arrested in Turkey after a coup attempt there. Brunson was pastoring a small protestant church of about 25 congregants when he was accused of taking part in a coup attempt and being involved with American espionage among other things. It was claimed that he was interested in overthrowing the Turkish government and that he also supposedly helped plan the coup.

Andrew Brunson is from Black Mountain, North Carolina and attended a church there that Franklin Graham once did  He is married and has three children and had lived in Turkey for 23 years until being arrested. His wife was also arrested alongside him, but was released 13 days days later.  He reportedly had lost over 50 pounds while in the prison but was later moved to house arrest on July 25, 2018. The trial caused a major diplomatic rift between the United States and Turkey and resulted in U.S. economic sanctions being placed on that nation.

But his ordeal is now finally over with after great pressure was exerted against Turkey by the Trump administration. It was described as a combined bipartisan effort, but it appears that the President had a major role in securing the wronged American pastor’s freedom.

If you had opportunity to witness  the scene in the White House after Brunson’s return to the U.S.,  you know that it was a  touching  scene and one that will not be easily forgotten. He was sitting next to The President. His wife and family was on his right and the other guests, made up of political and religious leaders, sat on the other side to the President’s left. And at one point he was asked if he had any additional comments. It was then when the pastor somewhat shocked just about everyone in the room and maybe across the country. He looked at  Mr Trump and said this and I quote: “We would like to pray for you. We pray for you often as a family. My wife and I pray for you.  The President responded  ‘We thank you. I probably need it more than anyone you know. So that would be very nice. Thank you’

I’m sure you were stunned and inspired at these words going out from the White House if this is the first time that you heard them.  But to actually visually witness this pastor on his knees before the whole world, and praying for the President after what this man had gone through for two full years, was just beyond description. But there were a few things that came to mind  that I’d like to briefly express on the event.

First, I was reminded yet again of the words in 2 Timothy chapter 3, with the context being the perilous last days before the return of Jesus Christ.  After describing the brutal conditions of that time, the  author wrote in verse 12, “Yes, and all who desire to live godly in Christ Jesus will suffer persecution “ And pastor Brunson certainly knows those words and personally experienced them.  Living a good honest life is of course commendable. But as soon as the name Christ comes into the equation for doing so, then persecution is not far behind. And this raises a sobering question for all who claim to be followers of Christ.  If we never suffer ever suffer even minor grief for our faith, then do we have any real testimony at all before the world? Again that should be a wake up call for us all.

Secondly, I was reminded that sometimes we are allowed to suffer in order to glorify God’s name and work. Had this pastor never experienced what he did, he would never have become someone who is now known around the world and someone who was given the opportunity to do and say what he did in the White House in front of the entire nation and world. Millions who may not know His Savior have now seen what a committed victorious Christian believer is capable of, and can endure, with the help of His Lord.

And lastly, we can see in this event was something that relates closely to whole matter outlined  in 1 Timothy2:2.  There we read, “Therefore I exhort first of all that supplications, prayers, intercessions, and giving of thanks be made for all men,  for kings and all who are in authority,  that we may lead a quiet and peaceable life in all godliness and reverence.  For this is good and acceptable in the sight of God our Savior, who desires all men to be saved and to come to the knowledge of the truth."

When you look at this passage, we see no mention of praying for any specific political party, side  or philosophy. It speaks of praying for ‘all’ who are in positions of high leadership. There are no other specifications mentioned. And just think for a moment of who received this original letter and the oppression they were living under at the time. This admonition must have surprised most  in that day and I’m sure it is not an easy thing even today for some in our own nation.

But the reasons are clearly provided as to why we are commanded to do this. It enables us to live what is called quiet and peaceable lives. And even more importantly, it is good and acceptable to God and even seems in the context to relate to some perhaps coming to the knowledge of salvation as well through our testimony.

There has been a lot of very rough and discouraging news in the last month or so. The country suffered the stress of a brutal supreme court nomination that further divided the nation. And now we face the critical mid-term elections as well. And then there came  the two quick and brutal Hurricanes, first Florence and then Michael, that absolutely devastated large areas in the south from Florida to the Carolina's.

But with all of that aside,  it was refreshing to witness the story of this dedicated Christian servant, who was persecuted while serving his Lord oversees. His response and actions, in the midst of insane struggles, revealed the reality of His faith and the reality of the God who sustained him through it all. And this should encourage us all as believers - when we are reminded in such a mighty way that our God will never leave nor forsake us and that He is always safe to trust  no matter what may come.