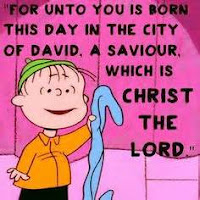 A recent article from onenewsnow.com revealed a story that has become all too common at Christmas time. It occurred in a nation that supposedly craves tolerance for everyone’s views on almost everything, that is, give or take Christianity. It is still hard to fathom how a holiday that bears Christ’s name can be attacked and pushed out of the public arena even by those who participate in it and gladly take the free day off of work it provides them.

This time the nonsense revolved around one of the oldest and most beloved Christmas TV shows of all time. And is not the first time that "A Charlie Brown Christmas" has caused holiday controversy. This year it was the Independent School District in Killeen, Texas that helped portray the ugly and ridiculous part of the infamous Grinch.

Dedra Shannon, a staffer at Patterson Middle School, decided to use the program’s images of Linus, the scrawny Christmas tree and the classic Bible passage to decorate the door to the school’s nurse office.  The decorations were installed on December 5th.  But two days later she was confronted by the school's principal and told that the decorations had to be removed. The stated reason was exactly the same as always. The Bible passage might offend those of another religion or those having none at all. And as expected, it was said that the display was a violation of the Constitution’s so-called separation of church and state. That’s amazing since that is a faulty assumption and no such thing really exists.

Ms. Shannon was told, however, that she could keep Linus and the tree on the door but the Bible passage had to be removed. Given that option, she took the entire poster down and stated, "I wasn't going to leave Linus and the Christmas tree without having the dialogue. That's the whole point of why it was put up." Ms. Shannon's pastor father said of the incident, "People want us to be tolerant for everything – but they don't tolerate Christianity, They bow down to everything else – except when it comes to Christianity." How tragic but how very right he was!

Efforts to curtail the real meaning of Christmas, and everything Christian for that matter, are nothing new. The attacks have intensified and the opposition may even seem to have gained ground over time in an increasingly secularized society. But none of that can change the deep meaning and power of the Biblical truth echoed by little Linus on air some 51 years ago.

“And, lo, the angel of the Lord came upon them, and the glory of the Lord shone round about them: and they were sore afraid. And the angel said unto them, Fear not: for, behold, I bring you good tidings of great joy, which shall be to all people. For unto you is born this day in the city of David a Saviour, which is Christ the Lord. And this shall be a sign unto you; Ye shall find the babe wrapped in swaddling clothes, lying in a manger. And suddenly there was with the angel a multitude of the heavenly host praising God, and saying, Glory to God in the highest, and on earth peace, good will toward men.” Luke 2:9-14

Christmas will always be an offense to those who don’t, or won’t, accept it for what it really is. Why is that?  It is because the coming of Christ to that messy manger in the long ago pointed to something in His future that would be infinitely more messy! His arrival in human flesh pointed to His destiny of dying upon the cross. He came to deal with the sins of humanity and that is offensive to those who feel no need for a Savior or the forgiveness He alone can provide.  Luke 19:10 states it like this.“The Son of man has come to seek and save that which was lost.”

The reality is, like it or not and believe it or not, that The Prince of Peace came to earth the first time to save sinners. And He is coming a second time to gather up all who have trusted Him and to be will Him forever in heaven. That is going to happen and perhaps very soon. And no amount of rejecting or ignoring that fact will ever change it. Trying to remove or hinder God’s word at Christmas, or at any time, is a senseless and futile endeavor as clearly confirmed in 1 Peter 1:24-25.

"All flesh is as grass,
And all the glory of man as the flower of the grass.
The grass withers,
And its flower falls away,
But the word of the LORD endures forever”