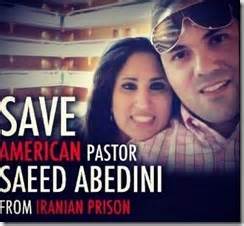 Much of the world has its eyes continually fixed on the nation of Iran and with good reason. The global community takes note of every move made by this rogue and dangerous Middle-East nation. Its record speaks concerning its attitude and goals for Israel and America. But some of the evil being perpetrated there on a regular basis is about the human rights. And this is especially seen in the treatment of Christians in that land. According to Open Doors, an organization that serves the persecuted church worldwide, Iran is number seven on the list of worst nations as far as persecuting Christians. The true number of how many have been tortured, imprisoned, or even worse is not really known.

But what is known is the terrible plight of one special man.  His life has been made a living nightmare just for being a believer in Christ and daring to serve Him in that difficult spot in the world. His name is Pastor Saeed Abedini. He is a 35-year old American citizen currently serving an eight-year prison sentence primarily for his Christian faith. He was initially detained in late July 2012 while visiting family in Tehran and working on plans for an orphanage. On September 26 of that year, members of the Revolutionary Guard raided his parents’ home and took Pastor Saeed to an unknown location. Four days later, his family was informed that he was in solitary confinement in the notorious Evin Prison – a place known for housing the worst of the worst.

During his confinement there and elsewhere, not only has the prisoner pastor had his life threatened regularly, but he has also suffered from some serious health issues that have not been attended to. He has likewise been denied the right to see his own family. He was sentenced for allegedly having undermined the Iranian government by creating a network of Christian house churches and attempting to sway Iranian youth away from the religion of the land – Islam.

It is hard to fathom to me that this desperate and dangerous Middle-East nation, which was desperately craving the recent controversial nuclear bargain, would not have allowed this one man to go free had the U.S. had put that on the table as a condition. Why on earth would they give up something they dearly wanted in order to hold on to something they did not really need?

But Saturday,  September 26 marks the 3-year anniversary of  Pastor Saeed’s imprisonment. His wife has been on a 21-day fast for his release and for others like him around the world. Concerning the plight of her husband she stated, “My husband is in jail simply because he loves Jesus Christ. When God’s joy and peace shine through in times like this, the world looks at it and says it doesn’t make sense. But they know there must be something behind it, so it draws the world to the reality of Christ.”

To any serious and sensitive Christian, the sad existence of Pastor Saeed, and so many others like him should not be something easily ignored. It is not easy to ignore a family member in any kind of significant trouble and neither should that be the case with one who is a brother or sister in Christ. They are family in the highest possible sense – in the spiritual and eternal realm. And they should be continually in our thoughts and prayers.

Receiving grief and aggression for one’s faith should not come as a shock to anyone familiar with Scripture. Paul confirmed that clearly in 1 Timothy 3:12 when he wrote, “Yes, and all who desire to live godly in Christ Jesus will suffer persecution.” If that is true, and it is if Scripture reveals it so, the issue becomes this: The question is not, "Why is Pastor Saeed being abused and what did he do to deserve his fate?", but rather the question becomes, "Why are any of us as believers not persecuted on some level if we are truly saved and in God's family? What is lacking in our Christian walk and witness if we never face any opposition as believers?"

Taking a stand for God should cost something. Depending on what and where that stand is taken will typically determine the level of  resistance that results. In Iran, it can come in the form of torture, imprisonment or even death. In America, it make come in the form of a county clerk being jailed because her faith hinders her from signing off on gay marriage licenses.

Many down through Christian history could have found an easier road, but instead chose a higher one. They traveled the path of living fully and openly for their Lord. As a result, some suffered loss for His name – things that we cannot really fathom. And the very least we can do is to stand behind those in the family who are of the caliber of the ones seen in Hebrews chapter eleven.

"Others were tortured, not accepting deliverance, that they might obtain a better resurrection. Still others had trial of mockings and scourgings, yes, and of chains and imprisonment.  They were stoned, they were sawn in two, were tempted, were slain with the sword. They wandered about in sheepskins and goatskins, being destitute, afflicted, tormented —  of whom the world was not worthy."  (Hebrews 11:35-38)

Pastor Saeed, and others today fit into this sacred "worthy" group of committed disciples. And these suffering saints, and their family members around the globe, are more than deserving of our efforts and fervent prayer!
Bill Breckenridge