Persecution On The Rise 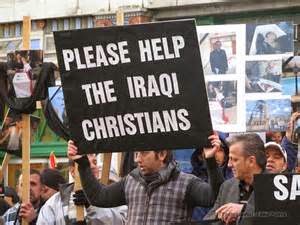 In 2 Timothy 3:1, the Apostle Paul wrote, "But know this, that in the last days perilous times will come." Then in the following few verses he listed some of the many characteristics that would be displayed when this awful time in human history finally arrived. He revealed how many would become blasphemers, unholy, unloving, without self-control, brutal, and despisers of good.

It can be rightly said that life in a fallen world has always been accompanied by sin and evil – at times horrific evil. But this new century is seeing a rise in something exceptionally brutal. It is being seen worldwide through the mind-numbing actions of a specific religious group. They are now commonly referred to as "Militant Islam". And while the vast majority of those who adhere to this huge religion are not a part of this extreme and violent sect, those who are seem to be growing at an alarming rate, and their persecution of others is beyond frightening – especially for Christians of any brand.

This has been seen in two major stories from the last few months. One was the ordeal of Meriam Ibrahim. The wife, mom and physician was arrested in the Sudan and sentenced to receive 100 lashes and then later to be hanged to death. Her offense was simple. Despite being raised a Christian by her mom, her absentee father was a Muslim. This meant that her marriage to a Christian man was not allowed by Muslim law and she was thus committing adultery and blasphemy. Her captors keep her chained in prison with her young son even though she was pregnant. She would eventually give birth in chains before finally being released due to worldwide pressure. Her ordeal is over, and she is free and living in the United States. But the hatred that fueled it all still exists and gives an idea of the mindset of those that perpetrated the terrible act.

Then too, and on a larger scale, Christians in the Middle-East are being hunted, tortured and executed at a ferocious rate. This was brought to the forefront when a group of Christians were chased into a mountainous region in Iraq and persecuted in ways that defy the imagination. Some were beheaded, others crucified and families literally buried alive before the U.S. military intervened to stop the genocide. It is estimated that there are some 2 million refugees from that dangerous country who have done nothing but be and remain Christians. It is being fueled primarily by a terrorist group by the name of ISIS. Experts claim that this bunch is more radical, more powerful, better organized and financed than was al-Qaeda at its best. They make no apologies for their brutally and for their global goals – one of which is to put their flag upon America’s Capitol!

Hatred, violence and persecution is not new. But it is growing at an alarming rate in these "perilous last days". So what is at the core of the issue? Simply put, it is the cross of Jesus Christ and what that represents. In Galatians 5:11, Paul wrote about persecution and about the crucifixion being the foundational reason. “And I, brethren, if I still preach circumcision, why do I still suffer persecution? Then the offense of the cross has ceased.” In that day, it was his fellow Jews joining the attack because the message of the cross irritated them because it required something radical of them – something they detested and rejected. But the foundation for the hatred back then is the exact same as it is today when Islam is involved. The names, faces and times are different, but the crime and its root cause are the equivalent. The message of the cross is exclusive, and therefore it is offensive! (Acts 4:12, 1 John 5:12, John 14:6)

In 2 Timothy 3:11-13, the Apostle Paul again spoke of being mistreated for his faith. But here he shared how any that followed Christ outwardly should expect like-wise. Speaking of the constant attacks leveled against him for his faith he wrote, “And out of them all the Lord delivered me. Yes, and all who desire to live godly in Christ Jesus will suffer persecution. But evil men and impostors will grow worse and worse.”

Being persecuted may be painful, brutal and unjust. But it is also normal and can be a sign of a believer living fully and outwardly for his or her Lord. And those who never ever feel any resistance along these lines should take spiritual inventory as to whether or not they ever display their Savior in any public meaningful way.

The days are indeed "perilous" and more for some than for others, of course. Satan seems to be moving full-throttle against God and His redeemed people. He has found his army of choice and provided them with an ancient hatred that causes them to do anything to hinder and destroy the church of Christ in these "last days". Pray for those of the faith that are suffering beyond we can really grasp. And be thankful that you have been spared this unimaginable fate – for now. And ponder the possibility that we may stand before God someday and give an account of what we did on behalf of our blood-bought spiritual family members who stood firm in the face of an agony from which we were graciously spared.

As far as the wicked, who now inflict pain and misery on God’s people, do not repay evil with evil. (Romans 12:21) Instead, pray for their hearts to be changed through the One they now curse and seek to destroy. And, as hard as it might be when evil seems to triumph, remember the chilling words of Hebrews 10:30 & 31. "'Vengeance is Mine, I will repay,' says the Lord. ... It is a fearful thing to fall into the hands of the living God."