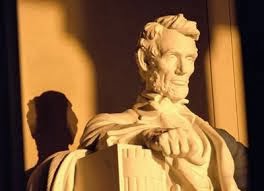 Today marks the 150th anniversary of the Gettysburg Address. What is perhaps the most famous speech in U.S. history was given by President Abraham Lincoln at the dedication of the Soldiers’ National Cemetery four months after the Battle of Gettysburg. Today’s post, contrasting Lincoln’s timeless eloquence with the empty words of another president, is the chapter entitled “Talk” from the book Presidential Profiles by David M. Virkler.*

William Henry Harrison established several “firsts” in the presidency and should be well remembered. But it is not so. He came to office at the age of 68, the oldest Chief Executive until Ronald Reagan. Previously, our presidents had walked into the White House on the strong political planks of a solid platform. But Harrison was borne in on the wings of song and catchy slogans. His supporters sang, “Tippecanoe and Tyler, Too” and coined the phrase “Keep the Ball Rolling,” an expression still used today to describe steady advance.

But perhaps he is most unremembered because of another inglorious “first”—he was the first president to say so much and do so little. His tenure lasted only one month, but no one could have predicted it listening to the torrent of golden oratory that fell from his lips during his inaugural address spoken from the Capitol steps on March 4, 1841.

Although he was old and tired, his many years and great plans expressed themselves for one hour and forty minutes. Thousands of words, cut and fit by the great Daniel Webster, deluged the people. The weather was cold and raw, blown in by a vicious northwest wind, but the President refused coat or hat. At the conclusion of this inaugural masterpiece and vocal marathon, Harrison chose to lead the Inaugural Parade to the White House in the biting wintry blast, still overbilled and underclothed.

Some historians believe he caught cold. Regardless, only one month later he lay dead of pneumonia. Even his wife was thoroughly shocked; she heard of his death on her way to residency in the White House.

Harrison gained significance through insignificance—he said the most and did the least. While his address flounders in obscurity, another speech of only ten sentences and two paragraphs is timeless.

Some predicted that the presence of Abraham Lincoln at Gettysburg would prove a national embarrassment. What could the lanky, awkward Chief Executive add after the brilliant two-hour oratory of famed speech-maker Edward Everett?

Lincoln finished his few sentences before most listeners were aware that he had begun. Yet, the incisive address scratched on rough paper during a bumpy train ride had focused a thousand loose thoughts into a single conciliatory document. Incredibly, it would be immortalized at Gettysburg and in Washington, D.C.

Words without deeds are hollow and impotent. That is why no school child has ever memorized a single word of the president who said the most and did the least. But, almost without exception, Americans respond to the cadence of “Fourscore and seven years ago….”

The Lord Jesus Christ declared that words are cheap, but deeds will keep. “But why do you call Me ‘Lord, Lord,’ and not do the things which I say?” (Luke 6:46) “Let your light so shine before men, that they may see your good works and glorify your Father in heaven.” (Matthew 5:16)

Today, the choice is often between Harrison and Lincoln, between promise and performance. Do we wish to say the most and do the least, or do we choose to say the least and do the most? Remember, history is an accurate and cruel judge.


* Presidential Profiles shares intriguing stories and facts about many U.S. presidents to illustrate important truths from God’s Word. It is available as a 2-CD audio book. Twenty-three chapters feature a number of U.S. presidents including Washington, Lincoln, Coolidge, Eisenhower, Nixon, Clinton, and George W. Bush. Also included is God & Faith in Presidential Inaugurals, a print compilation of all references to God, faith, prayer and Scripture in presidential inaugural addresses. Presidential Profiles is available for a suggested tax-deductible contribution of $15. Send a check or money order to: Dedication Evangelism, PO Box 10, Towaco, NJ 07082.